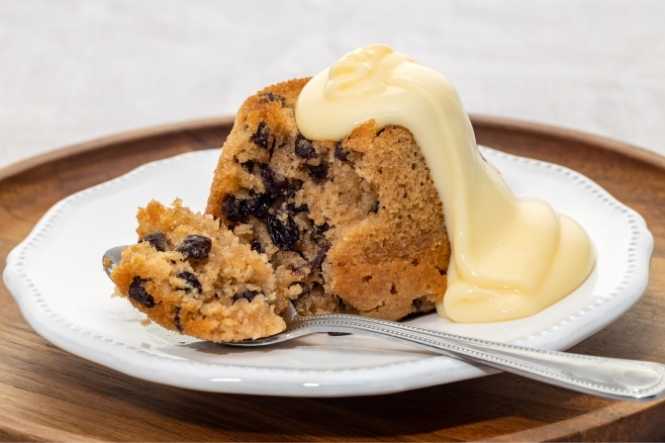 One good thing about the cold, dark and miserable evenings of winter is the excuse they provide for a hearty hot pudding to finish off your evening meal. These aren’t the sort of puddings you can eat at lunchtime – at least not if you plan to do any work – or play – in the afternoon! But when the day is nearly done the sight of a delicious warming pudding steaming on your plate, surrounded by a sea of rich yellow custard (and packet custard is absolutely fine here) can cheer the spirit and warm the heart of the most pessimistic.

The first young rhubarb should be appearing early in the year. Its slender stems make a delicious base for a light sponge pudding.

Wash the rhubarb stalks and trim the ends. Cut into 2 cm lengths and place in a greased 1 litre pie dish. Sprinkle on the sugar and orange zest and add the water.

Cream the margarine and sugar together until light and fluffy. Beat in the egg a little at a time. Fold in the flour. Spoon the cake mixture over the rhubarb.

Place in the centre of the oven and bake for about 35 minutes or until the sponge is well-risen and golden. Sprinkle with the icing sugar and serve with custard or cream.

Add a little ground ginger to the rhubarb for an extra zing.

For a traditional warming treat on a cold winter’s day you can’t beat a steamed pudding.

Grease a 1 litre pudding basin. Put a large pan of water on to boil.

Rub the fat into the flour until well-combined then mix in the sugar. Stir in the beaten egg and a few drops of vanilla essence. Add enough milk (3-4 tablespoons) to give you a medium-soft consistency. Place the tablespoon of jam in the base of the pudding basin. Spoon the sponge mixture on top and level it out.

Cover with a double thickness of greased greaseproof paper, folded with a pleat in the middle (to allow room for the pudding to rise). Tie the greaseproof on tightly with string, leaving a little loop at the end to enable you to lift it easily from the saucepan. Place the basin in the saucepan, cover tightly and steam for 1½-2 hours, keeping an eye on the pan to make sure it doesn’t boil dry.

When the pudding is almost ready make the jam sauce by blending the water, cornflour and lemon juice and adding to a small pan with the jam. If you prefer a smooth sauce sieve the jam into the saucepan. Heat, stirring until the sauce thickens.

Unmould the pudding and serve with the hot jam sauce and loads of lovely custard.

As an alternative replace the jam with golden syrup and serve with extra warmed syrup and custard.

Once a staple of every school dinner table this pudding has fallen out of favour but deserves to be given a chance!

Put a large pan of water on to boil and grease a 900 ml pudding basin.

Mix all the dry ingredients together. Make a well in the centre and add enough milk to make a soft dropping consistency. Place in the pudding basin and cover with a double thickness of greased greaseproof paper, folded with a pleat in the middle. Tie the paper on securely and place the basin in the saucepan, cover tightly and steam for 1½-2 hours, keeping an eye on the pan to make sure it doesn’t boil dry.

If you have a steamer you can use less milk and make a soft dough consistency. Form into a roll and wrap loosely in a double layer of greased greaseproof paper and then in foil. Make sure the ends are tightly sealed and then steam over boiling water for 1½-2 hours.